There was no excuse not to use the fitness room at the hotel I stayed at this weekend during my brother’s wedding because it was literally across the hallway from my suite. 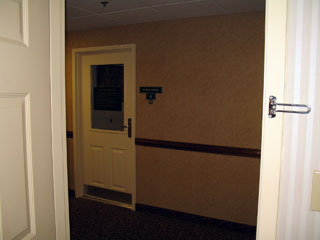 I did not request this, it just happened. Of all the possible rooms on three floors, I ended up about 4 feet away from the treadmills and stair-climbers. I woke up early Saturday morning, got dressed and stretched in the dark so I didn’t wake my mother, and stumbled across the hallway. There were two treadmills, but the first one’s power key was broken in half, so you couldn’t turn it on. I turned on the TV and got on the second treadmill and walked for about 5 minutes to warm-up. Then I pushed it up to 5 miles per hour to jog for about three minutes. Next I decided to throw in some one minute intervals where I would ran as fast as I could until I felt like “throwing up a lung” as Skwigg would say. I pushed the speed up to 6.2 miles per hour, making sure I located the “stop” button first in case of an emergency, and started plowing full speed ahead for about 5 seconds until –

The power cut off.

Suddenly the TV went dead and the lights on the treadmill went out. I tried unplugging it and plugging it back in, but neither device would turn back on. I must have tripped the power circuit. The fitness room could not handle my athletic prowess. The circuit breaker was obviously not up to the demands of an elite athlete such as myself.

So, I got on the cycling machine instead and did about 18 boring minutes to silence since I’d killed the TV and forgotten to bring my headphones for my MP3 player. I got a lot of additional exercise in at the reception that evening, which was totally kickin’. I was boogying out on the dance floor for a good portion of the evening and broke a spaghetti strap on my dress while raising up my hands to “Shout.” You know you’re not having fun until you have a wardrobe malfunction. Actually, I probably had too good of a time because my right knee is hurting again, but you’re not supposed to mix ibuprofen with alcohol, so I had to wait until the next day to take anything.

I will post pictures of me in my dress, but I didn’t get any good shots of myself, so I’ll wait until someone sends me some to post. A lot of people did say I looked great and I don’t think all of them could be lying. I certainly had a good time, which is far more important than looking good. And big congrats to my brother and my new sister-in-law!

Later: Greek yogurt is Greek to me