I finally renewed my driver’s license last month. Between the 190 pound weight loss and the LASIK, I was mildly worried I would get to the Bureau of Motor Vehicles (BMV) and they’d accuse me of strangling the real Jennette Fulda, stuffing her in a deep freeze, and stealing her identity. If I had been hit by a bus on the way there, I wouldn’t have been surprised if the police report said, “There was no identification on the victim’s body, but she appears to have mugged a fat girl before she was run over.”

The clerk at the counter, who had far better hair and complexion than I’d expect from an employee of the Bureau of Motor Vehicles, asked me, “Has any information on your driver’s license changed since your last renewal? Are you still 5′ 9″ and weigh 250 – whoa, girl you do not weigh 250 pounds.”

I admitted I didn’t even weigh 250 pounds when I said I weighed 250 pounds. She congratulated me and thankfully did not accuse me of identify theft. I also made sure to tell her it took me about two and a half years. There is still a humble part of me that feels like I should downplay the weight loss, or at least give a good sense of all the time and work that went into the process.

“It doesn’t matter how long it took. You look great!” she said.

When I’d first started losing weight, I lived for those kinds of compliments. I needed the pats on the back and the positive words from family and strangers. I needed to know that losing half my weight wasn’t a completely hopeless task, even though it seemed impossible. I’d try to find ways to slip my weight loss into conversations just so I could get compliments on all my hard work.

After I’d lost 90 pounds, I was sitting on my mother’s back porch, watching for hummingbirds to drink from the feeder full of sugar water, a beverage definitely not included on my diet. She mentioned she was visiting some of my aunts and uncles that weekend. “If you want to, you can tell them that I’ve lost 90 pounds,” I told her. “You know, just in case anyone asks how my weight loss is going.”

After awhile, I’d lost so much weight that I stopped wanting to tell people about it. While I liked the positive reinforcement the compliments gave me, I also felt strange being the center of attention. I didn’t want to brag and make people feel bad, especially when I realized almost everyone struggles with their weight. As a fat girl I’d known overweight people worried about being fat, but I was surprised to learn that even thin people were anxious about their size and would ask me questions about how they could lose ten pounds. I never knew what to say.

These days, I don’t crave those compliments like I did when I’d been on my wobbly first legs of weight loss. I was more insecure back then, unsure if I would make it to a weight that started with the number two, never mind making it to my goal weight of 160. I feel much more comfortable with myself now, confident that I can continue making healthy choices more often than not. And I do it for me, because it makes me feel so much better, not just because I get compliments from random government employees. Though that’s nice too.

The BMV employee snapped my picture in front of the blue canvas hanging from the ceiling. “May I say once again ma’am, you look amazing.”

“Thanks,” I told her and smiled. Compliments are always nice to hear, but I don’t need them to prop me up anymore. No matter what other people have to say, I feel as good as I look, and knowing that is enough. However, I still look like crap in my driver’s license photo, just like the rest of the population. I swear my hair did not look like that in my car’s rearview mirror. 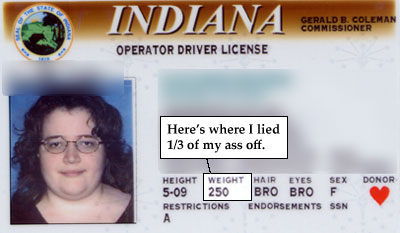 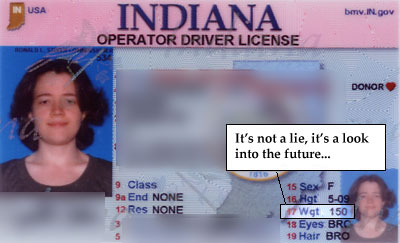 Later: Weighing in on August