It’s time for another edition of Lick the Produce Section, the adventures of a woman who once weighed 372 pounds but amazingly enough had not eaten every food on the planet. She’s going to change that, and she’s starting in the produce section.

Apricots started showing up in the grocery bins this month, so I grabbed one. The cute, tiny, yellow fruit was sweet and juicy, but I couldn’t help thinking it resembled a plum or a peach in sweetness and delivery system. They are all roughly, spherical fruits with pits in the center that could chip a tooth if I bit into them incorrectly. It’s like comparing 80’s hair bands. You’ve got your Bon Jovi, your Poison, and your Def Leppard, but can you really tell that much of a difference between them through the haze of AquaNet hairspray? Perhaps if I were eating these fruits fresh off the tree I would notice more of a difference. Instead, I eat them after they’ve been shipped from some other state or nation. There certainly are differences in tastes and textures between all these fruits. But an apricot isn’t as shockingly different from a plum than it is from, say, an apple, if we’re comparing apples and apricots. 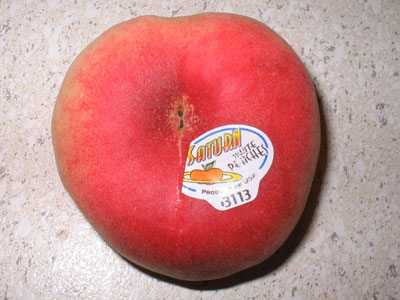 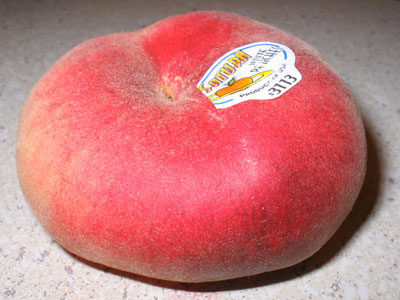 It’s a donut! No, it’s a peach! No, it’s a peach that is shaped like a donut. Sorry, no sprinkles and icing included. The sticker says it is a white peach by Saturn. Wow, import taxes from Saturn must be astronomical. I don’t know if this peach naturally grows in this shape or it is some twisted feat of genetic engineering. If it’s the latter, I’m looking forward to the day when our fruit comes in a variety of shapes and even letters and we can spell out naughty words in the produce section. During Valentine’s Day they could sell heart-shaped peaches.

The donut shape of this peach was really handy. Typically when I eat a peach, juice starts running down my hand and past my wristwatch. Sometimes it sprays my shirt. I realize I could just cut it into pieces, but that would require a knife and pre-planning and I just like to grab a peach and go. I just ate this peach like a donut and the sticky hand factor was reduced to almost 0%. Thank you genetic engineers! It also tasted, well, just peachy!

Don’t worry, I didn’t start snacking on these raw or try to steam them in the microwave. I used them as a garnish in my egg muffins. Strangely, I’d only used white onions and red onions, but Al Gore must have had an affect on my because I’ve now gone green. Not much else to say other than they added a nice zing of flavor, were easy to chop, and freeze well. Oh, and after the turnip they’re the other veggie that reminds me of Super Mario Brothers 2.

Finally! A vegetable that includes instructions on the label! Thank you, white asparagus, for realizing I don’t know which end of you is up. 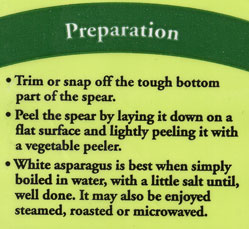 Asparagus is one of the foods that I was sure I hated, though I could not remember ever eating it. It was like knowing gravity would cause me to fall off a building. No one had to tell me, I just knew this. Asparagus = bad. Undoubtedly some childhood experience with the vegetable convinced me forever that it was nasty and the green sticks should never be stuck in my mouth. However, I’m starting to run out of vegetables in the market that I haven’t eaten, so I thought I’d give the white variety a try. And I’m glad I did.

The taste of the asparagus was a bit too bitter for me to truly like, but I loved the texture. So crunchy! Someone in the “weird stuff you’ve eaten” thread said they used to eat Styrofoam peanuts. The asparagus reminded me of that, but in a tasty, non-toxic way. I think part of the reason I love cereal so much is that I love crunching on it. I went to summer camp once with a girl who had grown up without a taste of smell, which also greatly reduced her sense of taste, so many of her favorite foods were determined by texture. When I met her, she’d recently had surgery that gave her back her sense of smell, which wrecked a bit of havoc on her life when she tasted cupcakes and chocolate for the first time. In her dorm room I saw a chocolate Hostess cupcake on the top shelf of the closet with a post-it note attached that said “Do not eat.” That seemed very odd to me because if I was going to buy a cupcake I was going to damn well eat it, probably fast enough that I wouldn’t have time to write any post-it notes. I later found out she was bulimic. I always wondered if her eating disorder was triggered by her newfound sense of taste. It must have been amazing to discover that sense, like suddenly being able to see in color after viewing the world in black and white all your life. You’d probably want to eat everything you’d eaten all over again. But sadly you might discover some of your favorite outfits don’t actually match and that asparagus, while crunchy, doesn’t taste as good as cupcakes.

In my last edition of Lick the Produce Section, I steamed some radishes because that’s what AllRecipes.com told me to do. Unlike the asparagus, the radishes did not come with instructions. Many of you informed me I might like radishes better as a garnish on a salad or mixed in with cottage cheese with some salt and pepper. You were right. Radishes do make a tasty garnish. And they’ve been in the fridge for awhile now without hosting a mold party, which scores bonus points with me.

Earlier: Weighing in on June