While I was in Chicago, Kathleen tried to kill me. This is Kathleen: 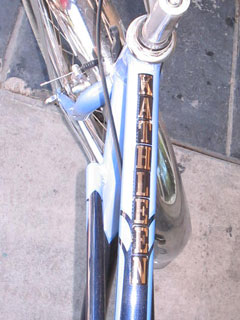 Kathleen was the homicidal bicycle I was assigned on Bobby’s Bike Hike, an otherwise awesome bike tour through Chicago. I thought about the boat tour or the highly recommended architectural tour, but when I saw an ad on the hostel’s bulletin board for a bike tour, I knew that’s how I’d be spending Sunday afternoon before my bus ride home. Back when I weighed 372 pounds, I could have handled floating around on a boat and my feet probably would have survived a walk around Chicago with only a few blisters, but there was no way I would have mounted my huge butt on an itty, bitty, bicycle seat. My butt rarely even fit into regular-sized chairs. So I decided I needed to bike around Chicago simply because now I can. And of course, I had a coupon. (When don’t I?) I also loved ringing my bicycle bell! I just wish there had been streamers on the handle bars too and a big wicker basket with a huge plastic flower super-glued on top. 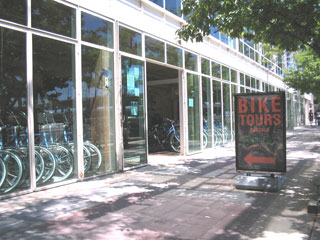 There were three tours to choose from. I signed up for the afternoon tour through Chicago’s lakefront neighborhoods because it fit my schedule. Before we left, our guide went over safety procedures with the two dozen people in our group. We were going to be a school of fish, a gaggle of geese, a force of nature flocking through Chicago’s streets that no man or Hummer could conquer. As long as we stuck together, we would all survive. It was like that scene in Gladiator where Russell Crowe tells everyone to stick together in a box so they don’t get speared by the dudes in the chariots. We also learned hand signals, some of which resembled 90’s dance moves. Everyone remember how to “raise the roof?” Well, in bicycle speak that means “pedal harder slow-poke because the light’s about to change red.” We were informed that the most important piece of information was to remember to grip your hand brakes together, but always grip the right one because it controls the back wheel. The only time there had been incidents on the tour was when someone gripped their front brake first and launched themselves over the handlebars.

So, we get onto the street and start to stop at a red light. I dutifully grip my back break first and…keep on sailing. Kathleen’s back brake was broken! I quickly called out to Andy, the tour guide, “Andy! Andy! My brake is broken!” At the next two red lights, Andy tried to fix the brake, but he was studying to be a lawyer, not a bike mechanic, and Kathleen was being a stubborn little bitch of a bicycle and wouldn’t cooperate. So I switched bikes with Andy and got to ride the lead bike with the flag on the back! It was awesome. I could have completely hijacked the tour and taken us all to Dunkin’ Donuts for carb loading. But I was good and just followed Andy to the Museum of Contemporary Art where a bike tour employee met us with my new bike, Sam. 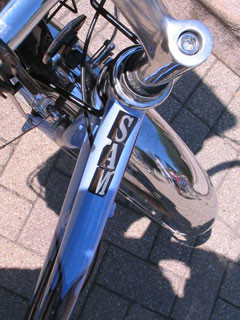 Sam was much more cooperative, though his bell was broken. He’s just the quiet type, like me, so I was empathetic. I had gotten a few good rings in on Kathleen, and if I had to choose between broken brakes and a broken bell, I was going with the aurally challenged bike.

The rest of the tour was fantastic. I am too scared to ride my bike in the streets in Indianapolis because I know someone would probably plow me down and keep on driving. But no one tried to run us over, and even if they did there was only a 1/24 chance they would have hit me. However, there was a horse that had an unusual reaction when we passed him: 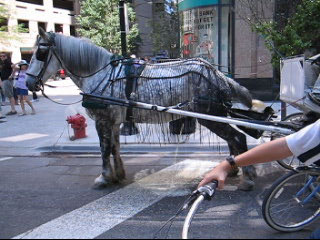 We went through Streeterville and saw a Rolls Royce and a Jaguar in the Gold Coast (aka the “Viagra Triangle” thus named for the all the old, rich men who hang out there with their young trophy wives). We headed through Lincoln Park and then stopped in Old Town where we went into St. Michael’s Church. There are 89 angels carved into the alter in case you want the secret answer to the tour question that supposedly wins you a prize. Then we headed past the zoo, over a bridge and up the crazily, crowded bike path to the North Shore Beach, where you apparently must be under 25 to enter. I was glad I’d done riding on my local trail because that path was packed with people and scattered with sand in some places. There was nothing separating the concrete path from the edge of the lake, and I knew if I was still riding Kathleen I would have invented the new sport of bicycle diving. Coming to the Xtreme Sports Games in 2008! Then we headed back to the Navy Pier area and the tour ended.

If you are comfortable riding a bike, I would highly recommend the tour. It was only about 7 miles round trip, all of it as flat as my chest, with several breaks. There were one or two slight slopes in the park, but otherwise it was easy riding. Remember to bring your sunscreen though, because I got slightly burned. And check your brakes before you leave the store! 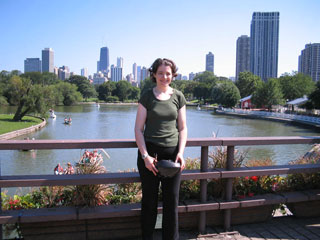 Later: Weighing in on July