I don’t think my double chin weighed 195 pounds, but an article I read says weight loss is all in your head. It was first published two years ago, but thankfully information does not go bad as quickly as the unwashed grapes in my fresher drawer, so I think it’s still relevant. A cultural anthropologist located 10 people who had successfully lost a lot of weight, kept it off and gave them all the Herrmann Brain Dominance Instrument (HBDI). That’s one of those fancy psychological tests that scientific people like to use instead of horoscopes. It looks at four quadrants of the brain used in problem solving and sees which ones you favor. I have no idea how useful or accurate this test is, but the researcher found that people with the most dramatic losses scored higher as a type B person:

“B” quadrant (lower left): These people are controlled, methodical, disciplined sticklers for structure and routine. Punctual and neat, they always have a plan, timetable and calendar with appointments penciled in.

Calendar? Did someone say calendar? With appointments and plans? 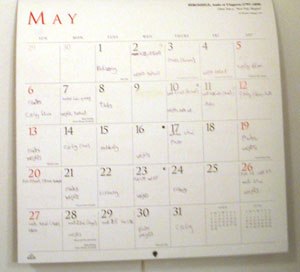 Behold, my wall calendar! (This picture is of May so the details of my plans for world domination scribbled on the end of July won’t be revealed). If I let more than two days go by without exercising it is quickly renamed to “the calendar of guilt.” It’s full of completed workouts, dentist appointments, and haircut reminders. As for planning – in preparation for the BlogHer conference this weekend I have already procured a map of Chicago, circled all my destinations in black ink, calculated the walking distance between points using Google maps, created an itinerary of which sessions I want to attend, written down what to wear on which days, made a list of questions to ask certain panelists, made another list of everything to pack in my suitcase, and made yet another list of errands I need to complete before I leave. If I have a timetable, it seats at least 50.

This all makes me sound like a neurotic control freak, but I’m mostly just that way about my own life. I let other people do as they please for the most part. Whenever I visit one friend of mine, our plans are so fly-by-the-seat-of-our-pants that I should really get frequent flyer miles every time I visit. It’s not my preferred way of living, but I can deal. When it comes to my own life and goals though, I do like having a plan. And a map. Ooh, and a highlighter!

I think I favor the “A” quadrant as well which is for “analytical, mathematical, logical problem solvers.” I especially relate to the part about how they “overanalyze a situation so much they have trouble taking action.” I literally spent about 10 minutes in the salad dressing aisle once trying to pick out the best dressing for me at the best price.

As with anything, you can train yourself to be better at using the “B” quadrant of your brain, so don’t fear. Even if you are doomed to attract clutter you are not necessarily doomed to be fat.

Thanks to Mymsie for the article link.

Later: Off to BlogHer!