I woke up this morning to find pictures of the bridal shower and bachelorette party I attended last month in my inbox. Check it out: 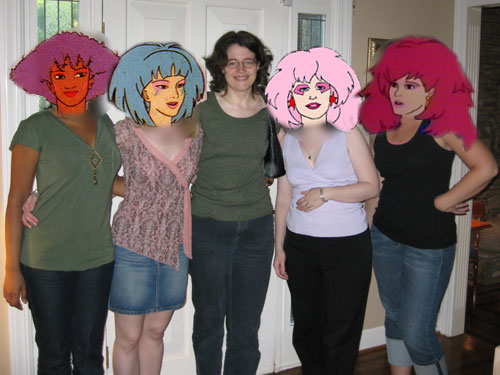 Oh yeah, did I mention my brother is marrying Aja from the 80’s band Jem and the Holograms? (She’s the one with blue hair.) She got the old band together and we had a fun night on the town. We invited Jerica too, but she didn’t show up for some reason. Before you ask, no, they’re not playing at the reception. It would be rather silly for the bride to be playing at her own wedding, wouldn’t it? And don’t worry, security will be very tight. We don’t want The Misfits crashing the party! Oh that Pizazz, what misdemeanors and felonies will she commit next?

When I looked at this photo I noticed three things:

1) Being the only person without animated hair really makes me stick out.

2) I am rather tall, aren’t I? I’m even taller than Kimber’s blown-out hair. Maybe that’s why people are surprised to find out I weigh 180. A shorter girl of my proportions would most likely weigh less.

3) If you were to ask someone to guess which girl in this photo used to weigh 372 pounds, they would only have a 1 in 5 chance of getting it right. I totally blend. I am not significantly fatter or thinner than any other person in this photo. We all look rockin’! The only giveaway might be the bit of extra skin under my chin. You can’t really see it in this smaller photo, but in the original large photo you can see it if you look for it.

Typically, I would not be excited to be considered normal. Normal is overrated in my opinion. Be unique. Embrace your inner freak. However, when weight is concerned, I have to admit I like being normal or average or “not afraid the seatbelt won’t buckle in my future sister-in-law’s sister’s car.” I was not tempted to stand behind someone else to hide my body like I used to when I was fat. I also no longer fear looking at photos from events I have attended. Actually, there is a lot less fear in general now. Here’s to a life with less fear!

Later: Do not enter! Oh wait, you can enter

Earlier: Oh what a beautiful morning