I have a BlogHer hangover. Not alcohol induced, though the pina colada at the cocktail party was delicious and had a cute half-cherry on the end of the toothpick, just a mental hangover from too much awesomeness. Must take nap. Brain tired.

I was not sold into slavery by the MegaBus corporation, though the CTA bus I was riding Friday night sideswiped a taxi and confirmed all the justifications I had for not driving in Chicago traffic. But basically, yes, it was as fun and cool as you think it would be, which was refreshing because I always have a secret fear that I will go to fun places and not have as much fun as other people. As if “having fun” is a competition and the drunkest person who sings an off-key Kelly Clarkson song while wearing a glow-in-the-dark martini glass on their head wins. There was no drunken karaoke (at least in my room), but there was amazing food, even more amazing people, and yes, lots of fun. It’s also something that would have been physically impossible for me to handle three years and 196 pounds ago. Though it’s probably closer to 190 pounds ago if the cheesecake and cannoli have anything to say about it.

To tide you over until I can download my pictures, here is a picture of the weight-loss/body/people-who-talk-about-the-size-of-their-ass bloggers that I shamelessly stole from Shauna’s site: 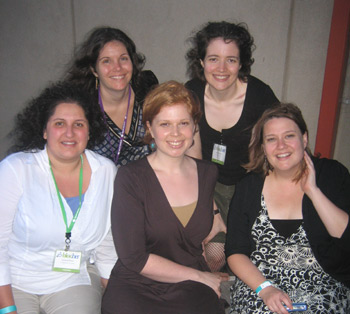 From left to right:

Corinna from A Celebration of Curves who is a nice Greek girl with hair curlier than mine.

Jen from Angry Fat Girlz and Yet Another Weight Watchers Blog. So easy to talk to and exudes kindness and thoughtfulness. Plus she tipped me off to the MegaBus!

Shauna, the DietGirl (although she’s not on a diet) who is bubbly and exuberant and so full of life that some of it spills over the top and gets all over you making you full of life and happy too.

Me! Wow, check out my collarbones. And look, I’m smiling with my teeth, so you know I’m not faking it.

Wendy from Pound! Who has written books (like, plural) and who I would easily consider way cooler than me, but was so gracious with her time and knowledge and such a real, witty person to hang out with.

I also met Weetabix and Sarah from Elastic Waist. It is my duty to warn you to never to get in front of Weetabix’s SUV because she will run you down like a dog and then laugh about it with Sarah as they snack on gourmet food.

ETA: Oh! And I met Tanya from I Ate a Pie who is so poised and friendly that I would eat a pie with her any time. I also very briefly met Kate Harding, but barely got to chat before running off to another session.

I also made friends with some fellow refugees from the hostel, which was a much better sleeping experience than I expected. Of course, I expected to see cockroaches organizing 5K runs along the baseboards and rats scurrying across the ceiling pipes as part of the rodent circus. Instead, it was like staying at a college dorm, complete with possibly drunken strangers knocking over bunk bed ladders at 1:00 in the morning. I was impressed with the huge lockers that held my luggage, backpack, shoes and all the swag I accumulated from vendors. I’d definitely recommend it to a traveler on a budget who doesn’t mind showering with flip-flops.

I had a delicious dinner at Giordanos with my new hostel buddies, Adrienne from Baby Toolkit (who doesn’t live too far away and I think is going to become my eating buddy since she knows all the good places to chow down in Indy. She also kept mentioning my book to people since I was too shy to do it myself.) and Jennifer from The Imperfect Mom (who taught me a lot about Malaysian politics and culture and sells a cool t-shirt that says “Fabulously flawed and loving it.”). There’s a saying, “Nothing tastes as good as thin feels.” Whoever said that needs to go to Giordanos and break out the strike-through tags for their HTML, because I think I’d actually kill a small, furry creature for a slice of their pizza. I also met Shonnie and Cassie at the hostel, though I didn’t get to hang with them as much.

I also met Pamela and My Momtra and about a zillion other people who’s blogs I now have to read and thus will never have free time ever again. The great tragedy was that I didn’t run into Kalyn of Kalyn’s Kitchen who helped me get a book deal and taught me to roast radishes. Kalyn, where were you?! I guess I’ll just have to go to BlogHer next year to meet up.

Now I’m at a point where I’m looking back at the conference and hoping I didn’t say anything stupid to anyone and hoping no one was disappointed by meeting me in person. I hope I was witty and smart and didn’t ramble on too much or annoy anyone with my lack of eye contact. Sometimes I think I come across best in blog format. I’m also wondering why I didn’t ask people more questions about their non-blogging lives, but honestly, going to a conference and chatting with people and making new friends like I did was something that was completely unthinkable for me several years ago when I would have preferred to hide under the tables. I feel a lot more willing to be part of the world these days. Part of that is the weight that I’ve lost, but part of it’s something else, maybe just growing up? I have lost a lot of weight, but not all of it was measured in fat.

Earlier: Off to BlogHer!