Sometimes people offer to send me free products so I will review them on the blog. Usually I turn them down because I have integrity and ethics and morals and not because I have no counter space for a machine that carbonates home-made sodas, no of course not. I don’t want to be a sell-out, and if I was going to sell out it would be for a lot more than a free yoga book. I prefer my kickbacks to have more kick than that. I have no problem recommending products that I have found on my own because people ask me what scale I use and what exercise DVDs I watch anyway. But it’s hard to stay objective if someone has given you something for free because suddenly you feel like you owe them something.

But sometimes people offer me free pasta, me, the PastaQueen, the major marshal of the macaroni military. When I got the e-mail from Fiber Gourmet offering me samples of their new light pasta it was like someone had just sacrificed a goat on a Greek temple built in my name. How could I say no?

After visiting their website and reading some of their blog, I got the impression that they are a small company. I myself work at a small company and have a soft spot in my heart for fellow entrepreneurs. You get a lot of freedom when you don’t work for “the man” (even though I actually do work for a man), but it’s a lot of hard work too. You earn every last cent, just like you’ve got to earn every damn pound you lose. I sort of imagined Ari (the VP who e-mailed me) hunched over a noodle-making machine in his basement in the middle of the night while his wife shuffled to the top of the stairs in her pink bunny slippers and yelled, “Come to bed already!” But Ari would just keep cranking out the noodles and yell back, “No, I must make one last batch for the bloggers!” (Note: I have no idea if Ari has a wife or even a basement. Sometimes I just like to make up interesting back stories for people I’ve never met.) And then I read their blog entry about trying to pick a title for their company and how it was the “single most important aspect of your brand” and felt unspeakable kinship since my book title is still not finalized.

Fiber Gourmet was kind enough to send me three bags of pasta, one of each flavor which are Classic Fettuccine, Tomato Fettuccine, and Spinach Fettuccine. They come in resealable plastic bags like this (blogger not included): 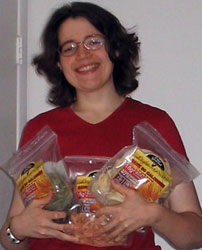 When I went to open the bag, I couldn’t find a notch to rip it open like I do on my shredded cheese bags. I thought, “Aha! I have found something negative to say! Now I won’t sound like a total shill!” But then I realized I’m a dumb ass and I could just grab both sides of the plastic bag and pull it apart pretty easily without the need for any scissors.

I don’t know if they did this on purpose or if it was an accident, but the wads are rather brilliant. The problem I’ve always had when I make spaghetti is that I don’t know how big it is going to look on my plate when it’s cooked. I don’t line up all the noodles in straight lines before I eat them. With Fiber Gourmet I can tell exactly how big my serving is, which greatly reduces my chance of overeating. I am prone to finish what’s on my plate, but if I only cook what I want to eat, I can’t pig out. Okay, I used to eat Ramen noodles raw, but I don’t do that with pasta anymore.

When I first moved out onto my own, I experienced some trial and error when I had to figure out how much food to cook for dinner. When I lived with my mother and brother I always cooked enough for everyone because it was polite. If I was going to sauté a chicken breast, it wasn’t that much more work to throw two more on the skillet. When I first cooked spaghetti just for myself, I used a mostly empty box I’d grabbed from our pantry. I just dumped the rest of the box into the boiling water figuring it would make about one serving.

Suddenly I was trapped in a live reenactment of Strega Nona

. There was pasta practically flowing out the door. I ended up eating all of it over the course of four meals, when I’d only thought it would make a serving or two. I’m sure packaging straight noodles is a more efficient use of space, making them easier to stack and transport and thus saves money. However, I’m not a truck driver or a loading dock hand. I am someone trying to manage my weight, and I much prefer the wads of pasta to the long noodles I get in a box from the grocery.

I cooked one wad of each flavor and I honestly couldn’t taste much of a difference between the flavors. Maybe this was because I cooked them all together and I ended up with a tomato/spinach/classic blend. But I wanted to review the pasta already and not leave Ari hunched over his noodle machine, so I thought it best to just cook them all at once. Then I poured some Prego on them and some Parmesan cheese and it was very good. It kept me full for the rest of the evening too. The nutritional information is comparable to other whole-wheat pastas and actually has less calories per serving. I was also glad they were not poisoned as part of an elaborate scheme by a disgruntled fat acceptance fanatic who might set up a dummy corporation and create their own pasta line just to kill me. I’ve really got to stop making up these back stories.

Later: And the title of my book is…