It’s time for another installment of “Lick the Produce Section,” a series cataloguing my continuing adventures to boldy try new vegetables that millions of people have eaten before. People used to live off the land, don’t you know? 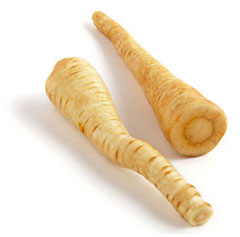 A parsnip looks like an albino carrot. Could this be the work of Bunnicula

, the vampire rabbit who sucks vegetables of their juice? It also looks like on organic baseball bat, so if ever an intruder were to break into my apartment while I was raiding the fridge, I could probably grab a parsnip and beat him death with it. Now that’s a handy root vegetable!

After taking this home from the grocery store I looked up its glycemic index rating and freaked out a little when I discovered it was 97. The glycemic index is a measure of how quickly a food is digested and how fast it raises your blood sugar levels. A spoonful of sugar rates at 100. So at first glance it looked like I might as well be chewing on raw sugar cane as snacking on a parsnip. However, while the GI measures your response per gram of carbohydrate in the food, it doesn’t measure how many carbs are actually in that food. That’s what the glycemic load is for. The GL multiplies the glycemic index by the percent of carbs in the food, and luckily the GL for a parsnip is only 10. For comparison, a baked potato scores around a 17. *sigh of relief* Also, why does eating have to involve so much math? Because I love to eat pi, that’s why! (har, dee, har, har. ? jokes never get stale.)

I sliced up the parsnip and roasted it in the oven. I might have sprinkled some spices on there, but I can’t remember because this was weeks ago. I do remember that the parsnip was pretty tasty, kind of sweet but crunchy. I’d definitely eat one again, though I might keep a spare in the fresher drawer to beat off vampire bunnies. 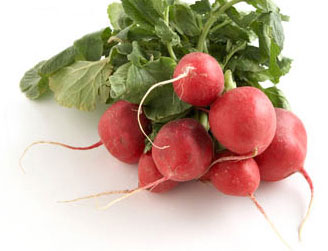 When I steamed the radishes in the microwave and they made the water a pretty pink color. They also did not go bad even though I stored them in my fridge for a week and a half. And that’s about all the nice things I have to say about radishes.

I’m not too crazy about that name to begin with. A “radish” sounds like some anti-biotic resistant mutant strain of a rash. I can just see a doctor telling some poor patient, “I’m sorry, Mr. Jones, that’s not just a rash you have on your arm, it’s a RADISH!” *cue dramatic strings*

I tried seasoning the radishes with some salt, but they still tasted somewhat bitter. The only thing that might make them more palatable is to drench them in other seasonings and butter. I can’t see myself ever having an incessant radish craving. They reminded me a bit of the turnips actually. If I had just returned from 40 days starving in the desert and stumbled upon a radish garden, I would eat them happily, but otherwise I’d pick another vegetable first. They might work better just as a garnish on a salad instead of a main meal in themselves.

ETA: Okay, evidently steaming radishes is really weird. I promise to eat them raw from now on. Y’all can stop telling me I’m a weirdo now.

Okay, I realize fish aren’t located in the produce section. I’ve never seen a fish garden with little fishy heads poking out of the dirt. That would make an awesome surrealistic painting though, or a cool gag to play on someone with a vegetable garden after buying a dozen plastic fish at the dollar store. Regardless, I wanted to mention that I’ve been trying some new fish. Why? Because there was a sale, of course!

Recently I’ve eaten flounder and tilapia and ocean perch, as well as an old favorite of mine, orange roughy (which in a blatant display of false advertising is NOT orange). Is it just me, or do most fish taste the same? They’re like the tofu of the ocean, they just take on the flavor of whatever you serve them with, be it lemon juice or a feta and spinach spread. Granted, salmon has a distinct taste, and I suspect there are other types of fish that have their own distinct flavor, like catfish or bass perhaps. However, if you’d served me a bite of each of these three fish I really wouldn’t have been able to tell the difference. There may be many fish in the sea, but I can’t tell them apart. However, they have those good omega-3 oils and they don’t taste bad, so as long as they aren’t full of mercury I’ll be happy to keep munching on their tails.

Earlier: It’s a small world after all