I have continued my exploration of the produce section in the past weeks, inappropriately fondling vegetables that I do not know the names of as if they were strippers. There’s no dancing pole in the vegetable aisle, which would make shopping more fun. But I didn’t have to tip the stock boy a twenty in his apron string either, so I guess it balances out. 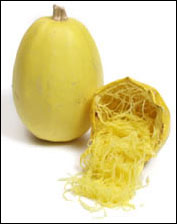 I had never heard of spaghetti squash before, but I’ve evidently been walking past it on my way to the cheese section for years. I cooked it in the oven for about 45 minutes after splitting it in half and placing it face down in a pan of water. Then I pulled it out to scrape out the insides. Those last two sentences sound like excerpts from The Happy Torturer’s Guidebook, but I swear that’s what All Recipes told me to do. The squash comes apart like strands of noodles, hence the name “spaghetti squash.” I ate it with some tomato sauce and Parmesan cheese and it was pretty good. I’d definitely have it again, though I’d never confuse it with actual pasta. 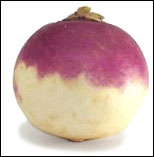 The turnip sounds like it should be the butt of a joke. There’s something ridiculous about the explosive “p” sound made when pronouncing its name. At least I had heard of a turnip before, but that was mainly because I played Super Mario Brothers 2 a lot and had to pull turnips out of the ground to power-up. I didn’t get fancy with this turnip. I just chopped it up and cooked it in the microwave. It wasn’t bad, but I won’t be going on a turnip-pulling rampage like Mario or Luigi anytime soon, not unless King Krupa is on the loose. 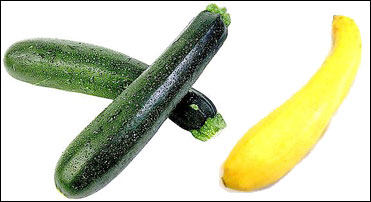 These are obviously two different vegetables, but I used them together in a southwest-style chicken stir-fry and they’re both squash, so I’ll review them together. It’s like how my teachers in grade school would always compare me to my brother, even though we were completely different people. We always got associated with each other by the fault of our shared DNA. Sorry, my squash sisters!

I think my brother put it best when he ate the leftovers of my stir-fry and said “I am amazed that I don’t dislike these little yellow things.” Aye, me too bro. The yellow squash and zucchini did well to bulk up the meal, leaving me fuller. They had a subtle taste to them, but also absorbed a lot of the flavor from the salsa and lemon juice in the stir-fry. Very tasty, definitely a winner, and they were easy to slice too. My brother even wanted the recipe.

I originally bought some cilantro for this recipe too, but after hanging around in my fridge for a week, it got all gooey and gross and I’m about 99% certain it wasn’t supposed to resemble a slime monster, so I tossed it. Which was just as well because I wasn’t sure how to chop it up properly. Chopping vegetables is a high-anxiety task for me. I’m always scared I’m going to cut off my thumbs and will no longer be able to press the space bar so allmytypingwilllooklikethis. I also always wonder if I’m cutting the food in the right way. I know there technically isn’t a “wrong” way to cut up a vegetable, but there are surely methods that are more efficient or safer than others. Or at least methods that don’t involve turnips spent spinning across the counter. Though a turnip does sort of look like a top, so maybe it secretly dreamt of spinning and I helped fulfill its ambitions. I make dreams happen! Or it was just scared of my BIG KNIFE.

Later: Through my what?!