The biography of my early childhood was written in T-shirts touting my accomplishments. The white ringer tee with the calculator on the front was from the time I competed in Mathletes. The pink shirt with the panda bear was from the time I sold over 200 Girl Scout cookies to frat boys. The dark blue Floyd’s Fork Farm long-sleeved tee was from the high school camping trip where half the class got drunk and smoked pot and we got the trip banned for the next four years. My brother had gotten one of those shirts two years earlier and it confused me because I thought forks came from Bed, Bath and Beyond and not from a farm. I was gently informed that it referred to a farm near a fork in Floyd’s river.

When I was scavenging the Goodwill racks earlier this week, I found a shirt from someone else’s biography. It was a brown tee from the French Broad River Rafting Expeditions. I’ve never been rafting, nor did I know where the French Broad River was until I googled it. (North Carolina.) I thought it would be fun to buy the shirt because it would be about as close to stealing someone’s identity as I could get without using their social security number and credit cards to buy clothes at a store that didn’t sell used shoes.

I imagined wearing the shirt around town until I eventually ran into someone who had actually been rafting on this expedition. Then I could chat with them about our rafting adventures and how fun it was. If they ever noticed any discrepancies in my bullshit story I would quickly mention the accident where I bashed my heads on some rocks in the rapids and how my memory had never quite been the same since.

However, the selling point that closed the deal on purchasing someone’s old shirt was the message on the back: 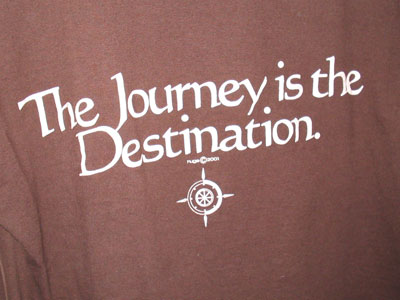 Ani DiFranco sang about finding religion in the greeting card aisle, but I found philosophical wisdom in the used T-shirt racks. This phrase could easily be interpreted as nonsense since any dictionary would tell you the journey is the journey and the destination is the destination. They aren’t cross-referenced in any thesaurus. But it sums up my philosophy towards weight loss right now.

It’s easy to focus only on getting to a certain goal weight and reaching the end of this weight loss journey. It sounds like the place you want to be, and I do hope I someday get to see the scenery from that vista. But when I think about where I really want to be, it’s experiencing the process that will get me to my goal. It’s eating healthy and exercising and generally feeling good about myself. Those behaviors will hopefully carry me down the river to my goal, but it’s the ride itself that is the best part, not the end of the trip.

Also, the T-shirt was a small and it fit. Tightly, but it fit. Sold! 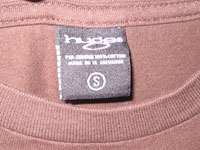 Later: Send some love to Chrissie