Today’s my two year fat-iversary. It was back on January 15, 2005, that I started losing weight for real after more false starts than a spooked horse at the Kentucky Derby. Strangely, I noticed I have the same fat-iversary as Diet Girl, but then decided that’s not so weird considering how many people go on diets in January.

When I started, I was hoping to reach goal in two years. We’re a bit behind on that. I might be dieting, but losing 200 pounds in 2 years was biting off more than I could chew. At the time two years seemed like forever and a day, so I couldn’t bring myself to set goal for any longer. Here’s a chart of my losses, the red line being the trajectory for hitting goal on time. Click on it for the bigger version: 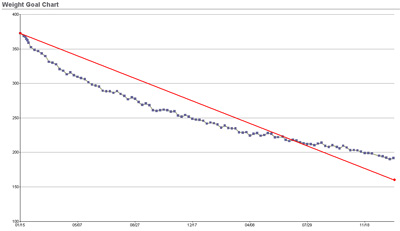 Through April I was outpacing the red goal line, thinking this would be easy peasy. Then I started keeping pace with it, but by June of 2006 I’d crossed over to the other side of the line. Now I’m about as far behind schedule as a government-run road construction project. It doesn’t really matter since the timeline was something I arbitrarily picked because I wanted to chart in years. Who would ever picka strange amount of time to hit goal in, like two years 7 months and 12 days? Years are just easier. But I would like to be at goal by the end of the year. Here’s hoping!

Later: Fat is a Feminist Issue