(Warning: Very mild Battlestar Galactica spoilers, though nothing you won’t know if you saw the season 2 finale.) The TV show Battlestar Galactica returned for its third season this week and anyone watching might have noticed there was a whole lot more to love, specifically a lot more of Commander Apollo to love. I think he’s a commander right now. The guy got promoted twice in just one episode, which I guess is what happens when 99% of the human population gets blown up by killer robots. You might not be able to buy alcohol or coffee anywhere but the black market, but career advancements for everyone!

So, it makes it all the more shocking that after the show jumped ahead one year Lee now looks like this: 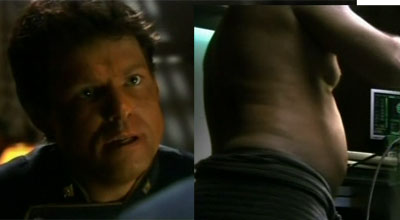 Apollo’s transformation is unique because it’s the only instance in TV or film that I can think of where I am not in some way offended by the use of a fat suit. Typically fat suits are used in comedies as a way to make fun of fat people, but here Apollo’s weight gain is an external manifestation of his internal feelings. In the past year the killer robots (the Cylons) have called a truce and most of the human race has started a colony on a barren planet. He’s a soldier without a war who’s started to go soft and this shows up in his appearance. Weight gain can be a sign of depression after all and his life has been pretty sucky lately. In the last episode his dad even called him a fat ass! Burn!

The only disappointing thing is how quickly fans are to break out the Porky Pig jokes about poor Lee. I don’t read too many fan forums, but I have stumbled upon the typical fat jokes. I don’t know if people think it’s more acceptable to make fun of Fat Apollo because the actor isn’t really fat or if they’d be just as mean even if Jamie Bamber had spent all summer in a bed of Twinkies and Cocoa Puffs.

Either way, I have to give props to one of my favorite shows for using weight gain as a legitimate character trait and not just as an excuse to get someone to disco dance in a fat suit.