Oh, okay, I lost a pound this week. That’s surprising. Since I moved, my scale is in a much more accessible place (namely my front hall closet) so I’ve actually been hopping in and out of the closet about once a day (in a way that has nothing to do with my sexuality) checking my weight. Let’s just say the numbers haven’t been good and we can’t blame the uneven linoleum.

I had mentally prepared an entry for today saying I had proved binge eating on the weekends wasn’t good for weight loss and that I should write up my findings for the Journal of the American Medical Association with some fancy title like “Midwestern researcher discovers ingesting large quantities of pre-packaged diet bars does not precipitate the loss of adipose tissue.” Because it’s well known that if you use enough fancy schmancy three dollar words in a research paper no one will be able to understand what you’re talking about but will never admit it for fear of looking stupid themselves. I totally could have gotten it published, if, you know, the data had actually matched the hypothesis. Not that such a thing would stop some people, but I haven’t fudged any scientific data since the 8th grade science fair and I’d like to keep it that way.

I did do a lot of walking this week, so maybe that made up for it. Or maybe waiting until 11:00 to weigh myself caused enough dehydration to make the numbers go down. Whatever. The big news this week isn’t my weight, it’s the fact that I bought a pair of calf-high boots. Yes! 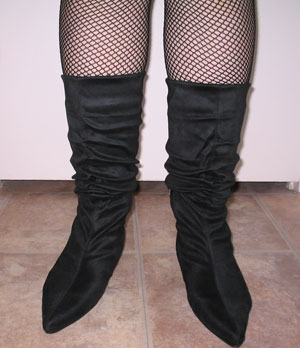 Does this mean I no longer have cankles? I’ve always wanted to own a pair of calf-high boots, but my fat calves always stomped on my dream. In retrospect, I’m sure there must be somewhere online where you can buy boots for the fat-calfed, but I never thought of that before. Now I just need to get a skirt so I can show these babies off. Methinks it shall be my first sewing project with my new sewing machine.