Lest you think I like to hog the spotlight, today I’d like to share another successful weight loss story, that of Officer Krupke! No, not the character from West Side Story, but my cat. (Half of my readers suddenly scamper off thinking “Oh dear God, she’s blogging about her cat! Run! Run!”) The other half of you just started singing his song “Geeeeee, Officer Krupke…” and then stopped right there because you don’t know the rest of the lyrics. Don’t feel bad. No one does.

At Krupke’s last vet appointment the doctor said he needed to lose some weight or else as he got older he was in danger of developing diabetes, heart disease and kidney failure. Hey, that’s just like us humans! I used to let the little man have little pieces of chicken or steak from my plate, but visions of wrestling a cat to the floor and injecting him with insulin every day was enough to stop that behavior. I have stretch marks, I don’t need claw scars. Surprisingly, Krupke didn’t throw much of a fit over it. I thought he’d hate my guts and start pooping in my shoes, but other than a little whining he’s been cool about it. (I still check my sneakers every morning though, just to be safe.)

In the past month he’s lost an entire pound, which is quite a lot for a cat and more weight than I lost in all of April. The bastard just loves to show me up. I guess I wasn’t the only one who lost weight because of the stress from moving. Hiding under the bed for several days and barely eating is evidently good for weight loss, though it might freak out your relatives. I think it’s only acceptable behavior for those of us with four legs and a tail.

I know you all are just dying to know how Krupke did it. Atkins? South Beach? I’m sure he’d blog about the experience himself if his paws weren’t too big for the keys and he actually had some language skills. As it is, I don’t think he even knows his name and the only thing I’ve seen him type is inscrutable expressions like “Mkmlkiojjjhhasdfasdfsafasdfjkhjkh.” Random assortment of letters or highly advanced form of communication? I don’t know. Honestly, all I did was reduce the amount of cat food I feed him and stopped feeding him anything off my plate. No kitty Pilates required.

It’s good Krupke is losing weight because maybe it will stop people from coming over and exclaiming “Wow, that’s a big cat!” whenever they see him. It’s rather eerie, but at least four different people have described him that way. “Big cat.” At first it really pissed me off because I thought they were just calling him fat, which he of course is, but there’s no need to comment on it. I don’t go over to people’s houses and call their kids ugly. People don’t need to talk shit about my cat in my own home. But after I visited some relatives with cats I realized Krupke actually does have a large frame. He is a big cat, not just fat!

I don’t have any 3-D photos of Krupke’s progress, sorry. The idea of trying to get a cat to stand still for 8 different photos is even more impossible than shooting him up with insulin every day. However, here’s a not-too-old-but-not-really-recent-either picture of Krupke debating whether he should eat the “Go Lean Crunch!” or just take a swig of alcohol. Yes, now I’ve become one of those people who not only blogs about her cat but also posts pictures of her cat to her blog. If I was ever cool, I’m definitely not now. 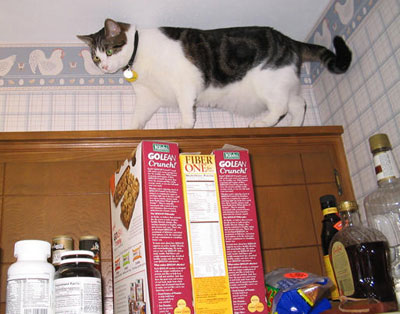