I got an ad from the United States Postal Service in my junk mail yesterday and was reminded why I don’t like the government. Exhibits A & B: 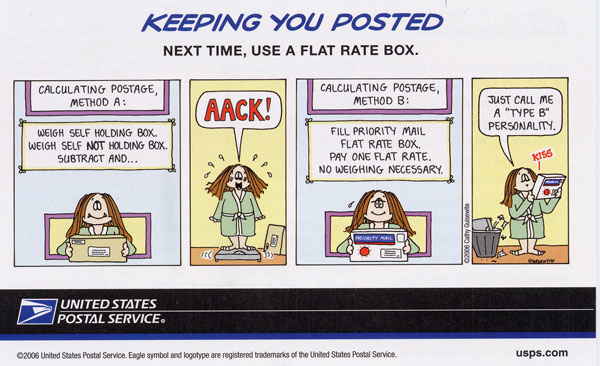 While I wouldn’t go as far as to say it offended me, I did think it was lame and annoying, which is how I typically feel about the Cathy comic strip character featured on the card. She’s always been too neurotic for me to relate to. Grow a backbone, Cathy!

I know the post office is just trying to be hip to pop culture by getting a major cartoon character in their ads and that this comic is supposed to be funny. I’m sure to some people it is. I know many of us have experienced the horror of stepping on the scale and seeing a much bigger number than we expected. I can see the humor in freaking out over that. I once saw a PhotoShopped version of Edvard Munch’s painting “The Scream” that had the screamer standing on a scale which I thought was hilarious. In fact, if the comic had ended after panel two I’d probably say it was pretty funny and true to life.

But it bums me out that the weighing experience is so torturous and Cathy feels so badly about her weight that she has to go out and buy postal boxes to avoid it. Spend your money on a gym membership instead, chica. It’ll get you farther. It also irks me that it’s a woman who is freaking out about weighing herself, not a man. The cartoon is a depressing reminder that women are judged more on their appearances than men and of how sad it is that people base so much of their self-worth on how much they weigh. The punchline is based on self-hatred and I can’t find that funny.

It also makes me think of all the time us weight loss bloggers have spent talking about how a number on a scale does not determine your self-worth and how hard it is for many people to actually believe that about themselves. Then this cartoon gets stuck in my face by my own government and seeks to undermine that idea. You might not be happy with that number on the scale, but that doesn’t mean you have to start buying tons of flat-rate boxes from the post office. For God’s sake, just buy a postage scale! And don’t stop weighing yourself. Denial doesn’t help. Go out and do something to make those numbers go down.