It has been brought to my attention by, well, half my readership, that I have gotten too small for my britches. Namely, my jeans are as baggy as MC Hammer’s pants. I was a tube top away from getting arrested by the fashion police! I have been rehabilitated though, I swear! As proof, here is a photo of me and my beautiful car, this time in pants that fit. Pants that fit me, not the car. Duh. 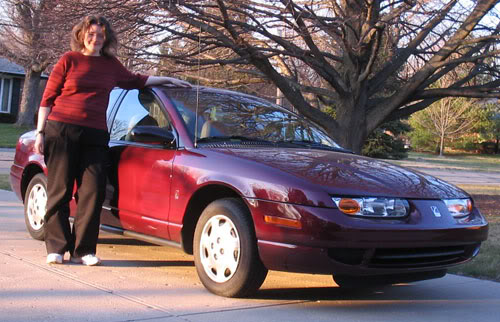 I had noticed my pants were big a month ago and went shopping for a new pair, but at that time I wasn’t quite a size 24. All the size 24s had that annoying gap at the back of the waist when I put them on. I did buy a pair of pants on sale that didn’t fit, which is of course a big “no, no,” since you don’t know if they’ll fit you right when you do lose weight. But I got lucky and they look fine and I wouldn’t have even bothered trying them on again for another week or two if you all hadn’t said something. So thanks! I was unaware that I’d lost that inch or two because my weight has stayed the same.

Looking at this picture also made me think most people probably wouldn’t guess that I weigh 235 pounds. I somehow manage to look thinner than that number implies. I don’t know if it’s because I’m tall or has to do with how my fat is distributed on my body or what. I want to have people look at this picture and guess how much I weigh, but I can’t really do that since I’ve got the answer key over in the right column. I think people would guess low, which only goes to show that the number on the scale doesn’t really mean much. That or people really have no concept of how much someone weighs, especially after they get above a certain point.

ETA: Okay, some of you are saying these clothes don’t fit me either. I know the top does not fit me anymore, but it matches the car which is why I wore it. Also, I swear to God the pants fit! They’re bell bottoms, so maybe they appear baggy at the bottom. Plus, I’m sort of in a shadow which may be creating the optical illusion of fabric folds where there aren’t really any. Yes, that’s it. Please don’t send me to fashion jail! I’ve tried on smaller jeans and I cannot sit in them.

ETA: Thanks for your honesty though! I appreciate everyone’s comments and don’t want people to lie or not comment to protect my feelings or anything. I’m a fan of constructive criticism.