I was reading a gossip blog yesterday with an entry about how Kate M0ss and Jack 0sb0urne (son of 0zzy) are dating. This was strange enough news for the day, but then I looked at the accompanying photo and wondered “Why do they have a picture of some running dude next to this article? Did the webmaster screw up?” Then I realized the running dude was Jack 0sb0urne. Check out the before and after: 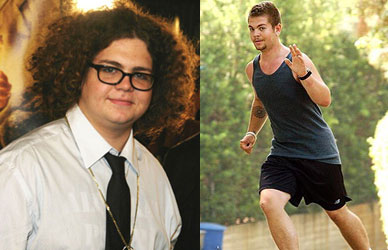 Looks like I wasn’t the only one busy last year. It’s photos like this that tempt me into thinking I should cut my hair really short and dye it red when I reach my goal weight just to freak people out. I’m probably going to get Lasik surgery sometime in the next year (assuming nothing breaks or explodes and busts my budget), so I could look like a totally different person. Throw in a nose ring and a tattoo and the DMV will think I’m using a fake driver’s license.

It’s also somewhat ironic that even though I’m undergoing a big physical transformation myself, I can still be surprised by other people’s transformations. It’s like how you may know several people who annoy you, but those people also annoy each other. You’d think annoying people would get along, but they are equally repelled by their own kind.

You also might be wondering why I keep replacing the letter “O” in these people’s names with the number “0.” Did some mischievous imp sneak into my house last and rearrange the buttons on my keyboard? Has some l33t h4x0r taken over my blog? No. After looking at my site tracking software, I’ve noticed that when I post entries with famous people’s names in them I inevitably get referrals from rude Google searches like “[insert famous name here] naked fat pics” so I’ve decided to obfuscate famous names from now on. I’m really sick of people finding this blog because they want pictures of fat T0bey Magu1re.