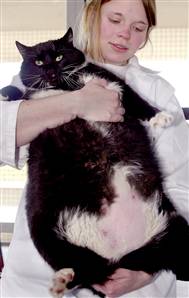 According to the article (behind the cut), people love fat cats. Maybe if I put on kitty ears and a tail I could get a date.

BERLIN – A Berlin animal shelter is trying to wean a 31-pound cat off its daily diet of oily tuna fish, hoping the obese animal’s health will improve enough to find it a new home.

Peter, the second grossly overweight cat the shelter has received in recent months, has trouble moving and cleaning himself because of his swollen body, spokeswoman Claudia Pfister said.

“Peter doesn’t like the taste of the diet food and will only eat tuna fish,” she said, adding the cat was 22 pounds overweight.

She said his elderly owner, who died recently, spoiled him with large daily helpings of tuna. “We’re giving him his tuna fish now, but only diet-sized portions and without the oil.”

In April, another cat named Mikesch was brought to the shelter weighing 40 pounds. He went on a diet and shed 30 pounds before he was handed over to a new owner.

“For some strange reason people love fat cats,” Pfister said. “They think it’s cute and spoil their cats with the best food they can afford.”

Earlier: Starting Over – Half of Me must go